When planning a career in information technology, everything starts with education. Although the world of IT moves at an incredible pace, there are countless proven systems and technologies that have existed, at least in some form, for decades. Some of the oldest computing platforms can be traced back to almost half a century ago, and even some of the operating systems in use today have roots in the earliest years of computing. When working on servers or even personal computers, the operating system will be an essential aspect.

Two operating systems that you will be exposed to throughout your studies at information technology college and during your career, are the Linux and UNIX systems. Although similar in some aspects, the two have branched off to provide different levels of accessibility and functionality. Even before you begin your training at ITI Technical College, you should familiarize yourself with the basics of both of these systems. 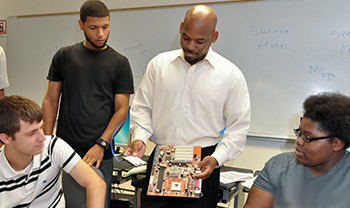 Many consider UNIX to be the grandfather of all operating systems. Initially developed in the late 1960s, UNIX has evolved in features and design, and is still highly relevant in business environments today. Even Mac OS, Apple’s closed source consumer and business OS, is based on UNIX.

UNIX is most commonly associated (by various versions) with hardware manufacturers. Because of this, it could be said that UNIX is a basic platform that is built upon to provide highly specific levels of functionality. Companies like HP, Oracle, and IBM, all use licensed versions of UNIX that have been customized for their own hardware for servers and business workstations. Today, you will find that UNIX is used by many large corporations and internet service providers.

UNIX is highly consistent throughout versions, which is necessary to maintain performance and functionality in critical business environments. The system is closed source, although there are some open source branches, such as the Berkley Software Distribution. UNIX was written in the C programming language, which makes it highly static, to prevent unwanted operations. This static functionality makes the system inherently secure, which is one of the reasons why it is so popular for businesses and in critical environments.

Because of the proprietary functionality that is built into custom versions of UNIX, it can be difficult to train in specific UNIX distributions at an information technology college. Because of this, many students focus on the fundamentals of UNIX, while specific functionality is learned for specializations, such as supporting Oracle Solaris.

How Does Linux Fit Into an Information Technology School?

Although there are a number of similarities between UNIX and Linux, the two operating systems are vastly different in design approach. While UNIX focuses on a closed system that is purpose built for specific server and workstation implementations, Linux is developed to serve a number of purposes, different types of users, and varying levels of hardware. Linux is also open source, which means that there are various distributions available, many of them community-built and supported.

Even though Linux is a more versatile operating system, it is still highly secure, and also cost effective. This means that many large enterprise and SME organizations are shifting to Linux servers, which means that Linux administrators are becoming more in demand. Google is a particularly high profile example of a large enterprise that has adopted Linux, with many of their search algorithms being processed by Linux servers. In many cases, administrators will be cross skilled in UNIX and Linux systems.

Although UNIX and Linux are two different systems, both are still relevant in the business world. To a smaller degree, Linux is also growing in the consumer space. As an IT professional, you will need to gain a broad understanding of various operating systems and technologies, before focusing on any specialization. ITI Technical College is the perfect place to develop your IT skills, with real hands-on information technology training. Explore the available programs today, and talk to us about our next enrolment schedule. With various branches of IT in constant development, there are countless opportunities to develop a career in an exciting and dynamic industry.